Idol producers also revealed that Interscope Geffen A&M chairman and record producer Jimmy Iovine would serve as a mentor to the new batch of contestants.

There had been rumors flying around for a long time about the identity of the new judges. Chris Isaak, Shania Twain, Elton John and Justin Timberlake had all been mentioned.

The question must be asked… Is this the end of Aerosmith as we know it?

“I’ve been on tour for most of my life in a band with four guys who judge me every day,” Tyler said in a statement. “Sometimes it hurt, but it only made me stronger. I want to give everybody a little love before I decide who goes home heartbroken. If you don’t like what I say, don’t get mad, get better.” Tyler is releasing his first solo single, “Love Lies,” in October. 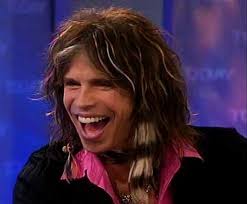