Band Of Brothers 2: Spielberg And Hanks Bring “The Pacific” To HBO March 14 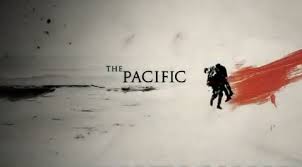 “I would say years. Longer than I actually remember. It was inevitable that we would do The Pacific with HBO because there was such an overwhelming response, not only from the general public that got very involved in Band of Brothers, but we got so much positive mail. At the same time, that mail said, “I was a veteran of the Solomons.” “I fought on Tarawa.” “I was at Midway.” We got so many letters of veterans from the Pacific Theater of Operations, asking us if we could acquit their stories the way we acquitted the stories of the European Theater of Operations…

…There are many more stories to tell, and we’re going to tell them.” – Steven Spielberg

Executive producers Tom Hanks and Steven Spielberg return to HBO (and World War II) with their latest 10-part miniseries, “The Pacific.”  The long-awaited companion piece to HBO’s Emmy-winning 2001 miniseries “Band of Brothers,” begins airing on March 14.  Word is that Pacific will be the most expensive miniseries in television history.  The $200-million budget is nearly twice what HBO spent on Brothers.  Pacific will run on consecutive Sundays at 9 p.m., presenting the war in the Pacific from the days following the attack on Pearl Harbor to the emotional return of troops home after final victory over Japan.

Here is a video from HBO on the making of The Pacific and a trailer: