Radiohead Back In The Studio, Thom Yorke At Coachella

Thom Yorke confirmed on the BBC Radio 1’s Gilles Peterson show yesterday that Radiohead will be back in the studio for one month, beginning tomorrow.  “Radiohead is still doing stuff. In fact, we’re starting another session for a month in two days,” Yorke said. “My biggest trouble at the moment is trying to keep up, but I prefer it that way.”

Yorke also confirmed his appearance at Coachella 2010.  “The Eraser band that I got together, we’re going to do something, hopefully in April, but I think that’s just more gigs,” Yorke said.  Could we be seeing the band that backed him during his LA solo gigs last year?  That band included bassist Flea and producer Nigel Godrich. 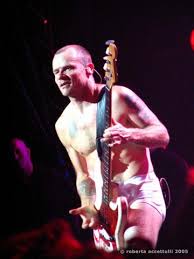